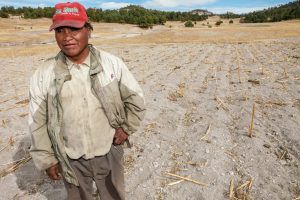 A farmer from the indigenous Rarámuri community in drought-stricken northern Mexico stands amid a dead corn field. The World Bank estimates that at 2 °C of global warming, 100-400 million more people could be at risk of hunger and 1-2 billion more people may no longer have adequate water.

With climate change impacts already killing hundreds of thousands of people each year, governments that continue to permit and finance fossil fuel production risk further undermining the right to life of present and future generations. In a submission to the UN Human Rights Committee, Above Ground and the Center for International Environmental Law argue that Canada should be required to address this issue in its next report outlining how it’s upholding its duties under the International Covenant on Civil and Political Rights (ICCPR).

Specifically, we submit that Canada should be required to explain what steps it’s taking to ensure that financial institutions and corporations under its jurisdiction do not cause or contribute to risks to human rights, including the right to life, through their role in fossil fuel production. While relevant to all ICCPR signatories, this question is especially pertinent in Canada’s case, given that Canada is the world’s fourth-largest oil and gas producer, a home base for oil and gas firms operating around the globe, and a major source of public financial support for the industry — with Export Development Canada providing billions of dollars in finance each year.

Canada’s report will be considered by the UN Human Rights Committee in an upcoming review of Canada’s adherence to the International Covenant on Civil and Political Rights. The committee has addressed climate concerns in its reviews of other countries, and acknowledged climate change to be one of “the most pressing and serious threats to the ability of present and future generations to enjoy the right to life.”