In an ecologically fragile region of southern Africa, a Canadian company is exploring for oil in what it says is “one of the world’s last remaining undeveloped deep sedimentary basins.” If successful, the venture could open up a vast new oil and gas frontier within the company’s licence area of more than 8 million acres — an expanse larger than Belgium — in the Okavango region of Namibia and Botswana. 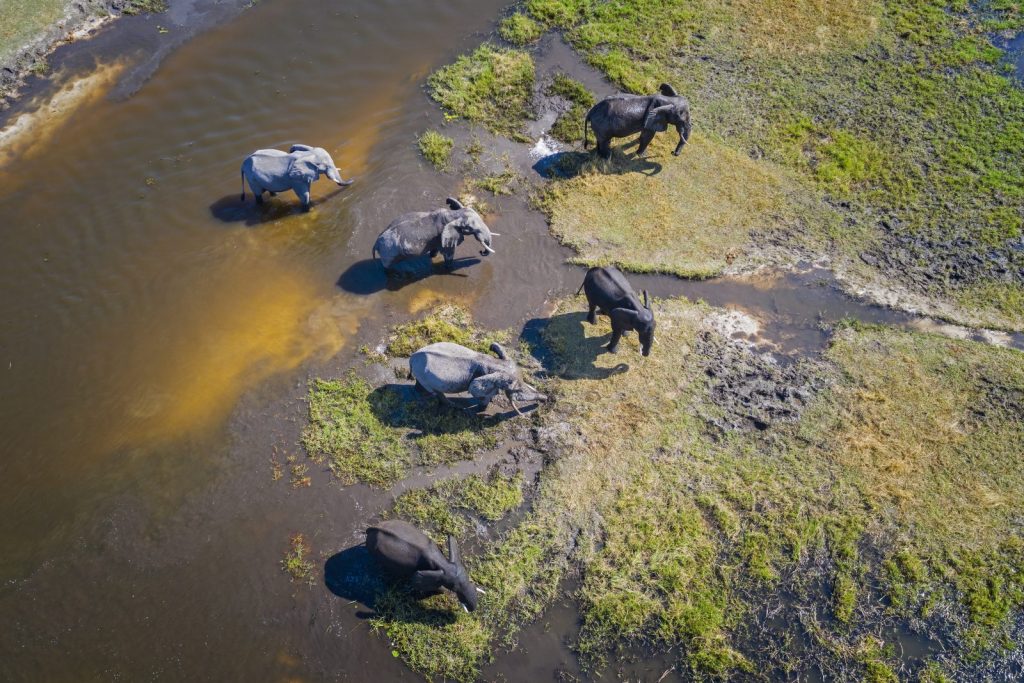 ReconAfrica is drilling upstream of the Okavango Delta, which supports over one million people and abundant wildlife, including the world’s largest remaining elephant population. Credit: istock.com/guenterguni

The project by Calgary-based Reconnaissance Africa Energy, or ReconAfrica, has sparked alarm among a wide array of local and international actors. Environmental groups and community leaders warn of possible contamination of critical food and water supplies, as well as threats to local livelihoods and endangered wildlife. The licensed area hosts one of the planet’s most diverse ecosystems and is located upstream from the famed Okavango Delta, a fragile desert oasis and UNESCO World Heritage site that’s protected by numerous international treaties. The delta’s watershed supports over one million people, nearly two thousand species, and the world’s largest remaining elephant population.

Amidst an escalating climate emergency, environmental groups from Africa and around the world are also raising alarms about the climate toll of a project of this magnitude. The International Energy Agency warned in May that there can be no new oil and gas development if the world is to avert the worst impacts of climate change and achieve net zero emissions by 2050. Namibia and Botswana are both drought-prone and impoverished countries that are acutely vulnerable to the impacts of warming.

A track record mired in controversy

The project is currently in its preliminary stages, with the company drilling test wells and performing seismic surveys to determine the presence of exploitable oil in northern Namibia. Yet already, ReconAfrica’s activities in the desert region have attracted a barrage of criticism from local communities, who accuse the company of ignoring concerns about the impacts of drilling and exploration on water resources, homes and wildlife.

Numerous experts consulted by the media say the company failed to address the potential impacts on water and wildlife in the environmental assessment for its test wells. One called it “shocking” that the assessment was approved. According to a journalist’s eyewitness account and ReconAfrica’s own video footage, the company appears to have disposed of waste fluids from its first well in an unlined pit — contrary to its stated commitment — raising major concerns around toxic contaminants seeping into the groundwater, which locals rely on for drinking and crop irrigation.1National Geographic reports that the company did not respond to “multiple” requests for comment about its waste pit, which it had committed to lining on numerous occasions, including in its report submitted as part of its environmental impact assessment for the test wells. During a Zoom conference in February hosted by the European Association of Geoscientists and Engineers, one expert asked the CEO of ReconAfrica, Scot Evans, why the company didn’t line the waste pit. National Geographic reports that Evans didn’t respond directly. See National Geographic, 12 March 2021. Statements from a Namibian government minister suggest the company was operating the well for months without the required permits for water use or waste disposal.2Calle Schlettwein, Namibia’s minister of agriculture, water, and land reform, told National Geographic in May 2021 that the company did not yet have permits for water use or wastewater disposal. Months before, a Namibian journalist had photographed what appears to be wastewater pooling in a pit at the company’s drill site. See National Geographic, 11 May 2021. Note that the National Geographic journalists asked the company about “wastewater disposal, water extraction, and the ministry’s assertion that ReconAfrica has not yet secured the proper permits.” They report that the spokesman hired by ReconAfrica “didn’t answer directly, but said in an emailed statement that the company ‘has completed several required permits for its ongoing work and will continue to complete all drilling-related and other permit requirements.’” 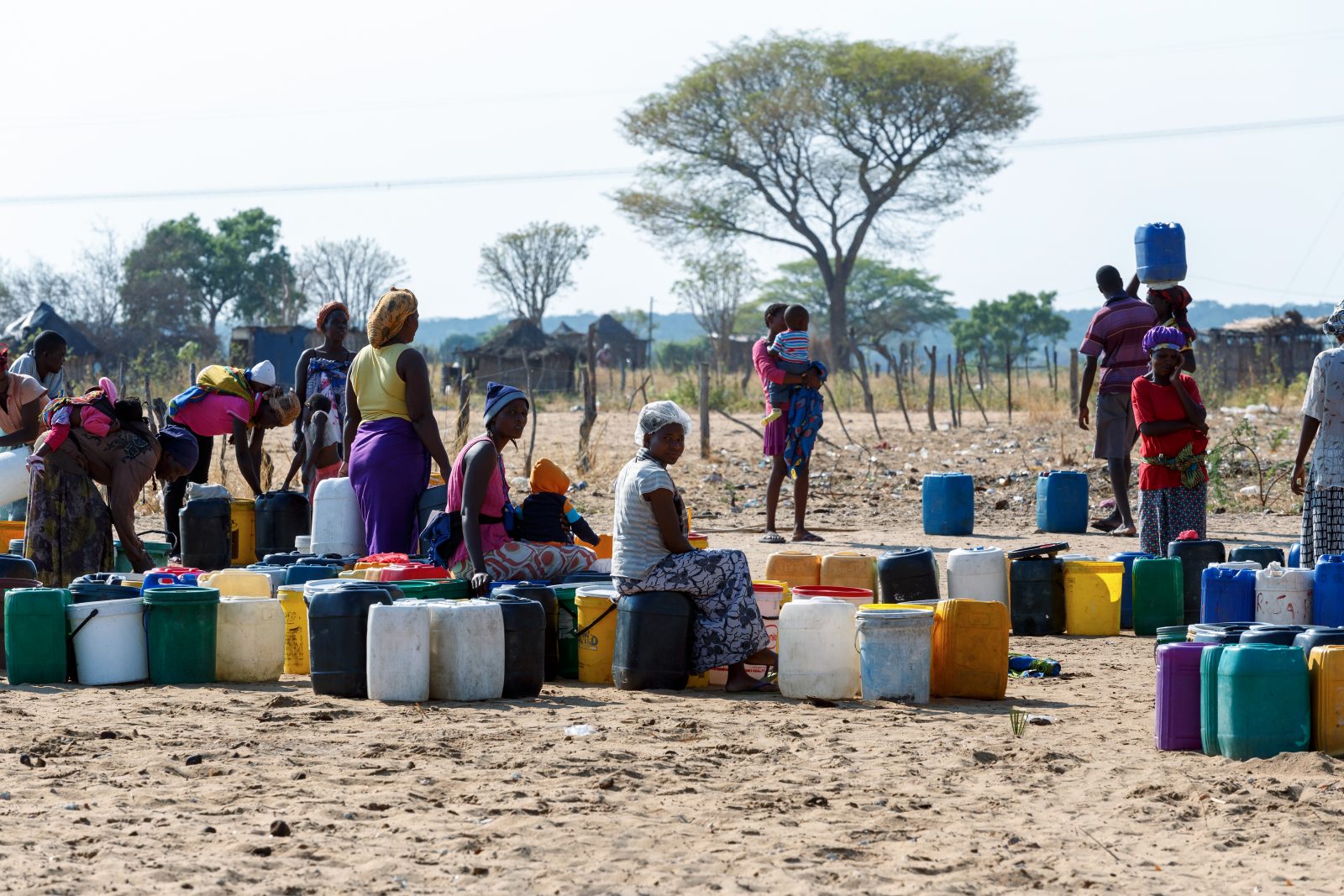 The project area is the homeland of the Indigenous San people who have inhabited the region for thousands of years. San leaders have expressed strong opposition to ReconAfrica’s plans, which they say would have dire consequences for their livelihoods, food security and cultural practices. The San people, for whom the region is considered sacred, say they were never consulted about the project.

Consultations carried out by the company to date have been heavily criticized for their lack of neutrality and for measures that limited participation, with the company accused of intimidating journalists,3ReconAfrica has threatened at least two media outlets with lawsuits in response to unfavourable coverage. See The Namibian, 16 February 2021. The Globe and Mail (20 June 2021) also reports receiving “aggressive pushback [online] from ReconAfrica stakeholders” for its coverage, though a company spokesperson denied any role in the harassment, adding that ReconAfrica does not “condone this behaviour.” critics and interested parties. The company is also targeted by a lawsuit filed in Namibia’s High Court on behalf of a local farmer, who alleges the company unlawfully “seized” his land holding and cleared it for drilling without obtaining the required permission. ReconAfrica replies that the local authority approved its use of the land.

Is the public being given the full story?

It is essential that local residents, regulators and stakeholders have complete and accurate information about ReconAfrica’s plans and operations. Otherwise, they cannot meaningfully assess the myriad potential risks to communities, the environment and the climate arising from a project of this nature in such a sensitive region. Questions have been raised, however, about whether ReconAfrica is disclosing a full and accurate account of its intentions and activities.

To date, three complaints have been filed with securities regulators in the United States, British Columbia and Ontario highlighting potential misrepresentations regarding the company’s activities in Namibia.4For the U.S. complaint, see National Geographic, 21 May 2021; for the B.C. complaint, see The Globe and Mail, 20 June 2021; for the Ontario complaint, see Above Ground et al., “Investigate ReconAfrica,” 16 September 2021. At issue in the Canadian complaints are questions over whether the company is targeting what are known as “unconventional” or “shale” oil and gas deposits, which are typically extracted through fracking. This controversial and water-intensive extraction method could present a heightened risk of depleting and contaminating scarce water resources — and, by extension, threatening local food crops — and provoking earthquakes in this geologically active area.

Above Ground was a party to the most recent complaint, filed with the Toronto Stock Exchange, which asks regulators to investigate inconsistencies in the company’s disclosures and public communications on this point.

As detailed in our submission, ReconAfrica initially vaunted the Okavango region’s potential as an “unconventional” or “shale” oil play. It reported that its exploratory wells would be designed “to test organic rich shales” alongside “conventional structures,” with shales as the “main target.” Yet after a public outcry led the Namibian government to issue a statement in September 2020 asserting that no fracking was planned for the region — Botswana later followed suit — the company’s website and other public materials were altered to remove mentions of unconventional or shale resources. In various statements and filings made since then, ReconAfrica affirms that it is targeting “conventional reservoirs” in its exploration work.

The company has not, however, altered its estimates of potential oil reserves in accordance with such a shift in focus. In reporting estimates of the prospective quantities of oil and gas within its license area, it continues to provide the same numbers it reported earlier as totals for both conventional and unconventional (shale) resources. Nor has it removed planned drill sites in areas previously identified as containing unconventional resources from its map of exploratory drilling operations. Areas labelled “Unconventional Plays – Thick Permian Shales” in an earlier version of the map have simply been relabelled “source rock basins.” 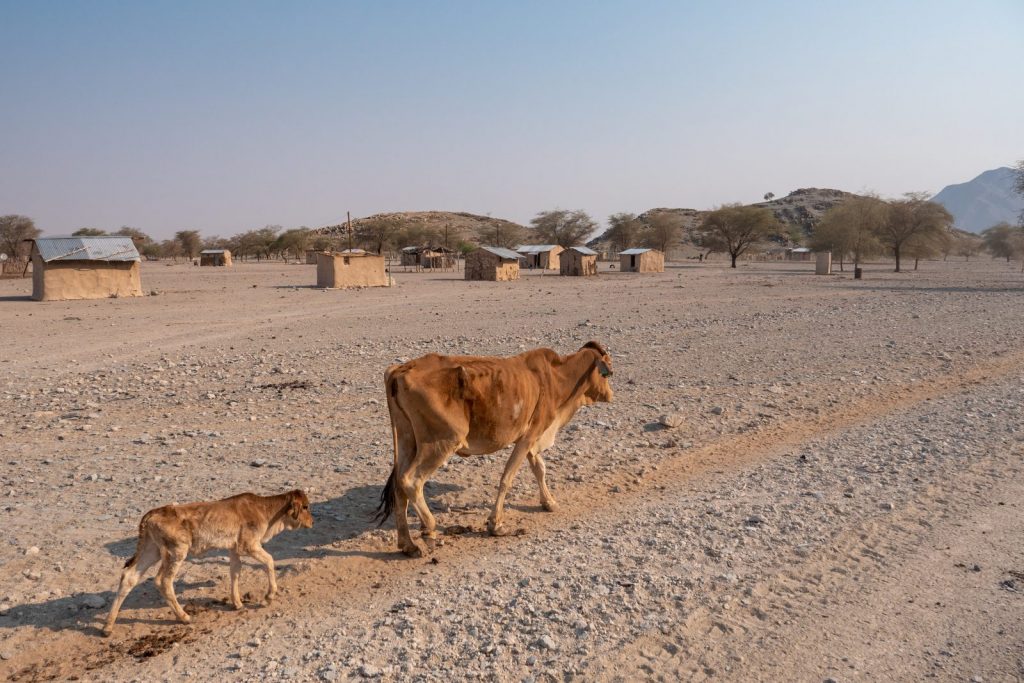 An emaciated cow and calf walk through drought-stricken Namibia in 2019. Credit: iStock.com/Dietmar Rauscher_

ReconAfrica’s track record to date, and the significant risks that oil exploitation could pose to the hundreds of thousands of people living within its project area, highlight the urgent need for mechanisms to ensure Canadian companies uphold their international human rights obligations.5These obligations are outlined in the United Nations Guiding Principles on Business and Human Rights, which have set clear global standards regarding the responsibilities of businesses to identify, prevent and address harms they may cause or contribute to throughout their global business activities.

The Canadian government continues to rely exclusively on voluntary measures to “encourage” responsible business conduct abroad. This approach, long criticized by human rights advocates for failing to prevent egregious abuses by Canadian multinationals, offers nothing in the way of recourse to the people and communities who fear water contamination and the loss of their land, livelihoods or crops as a result of ReconAfrica’s oil drilling.

If Canada had an effective due diligence law in place, along the lines of the blueprint proposed by the Canadian Network on Corporate Accountability, ReconAfrica would be required to

Under such a law, if the company caused harm or failed to do its due diligence, it could be subject to legal action in Canada. A court could order ReconAfrica to cease any harmful or reckless activities, provide remedy for those harmed, or both.

It’s time Canada caught up to global leaders who have understood that the protection of fundamental human rights, such as a liveable climate and access to clean water, food and livelihoods, is an essential state duty that cannot be left to the discretion of corporate actors. Canada can either persist in failed policies that fuel corporate impunity, or it can join these leaders in the shift towards enforceable human rights obligations for multinationals, to empower people the world over who are fighting to defend life and rights from corporate abuse.

To access a fully-referenced version of this case study, see below.