OTTAWA – Civil society groups are calling for improvements in accountability and transparency at Export Development Canada as the government reviews the agency’s governing legislation. 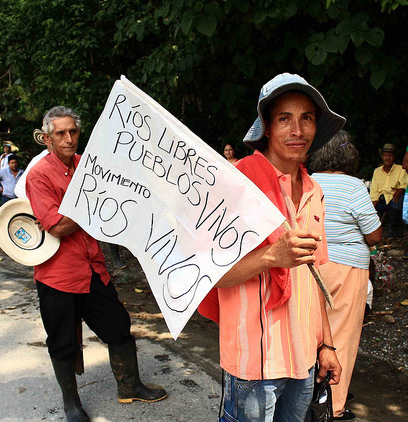 A protest against the Ituango hydro dam being developed by a client of EDC. The dam nearly ruptured this spring, forcing the evacuation of 25,000 people. Photo by Agencia Prensa Rural.

Numerous EDC clients face allegations of wrongdoing, as detailed in a submission to the federal government published today by Above Ground. Most recently, South Africa threatened to halt payments to frequent EDC client Bombardier following a corruption investigation. Above Ground recommends legal reforms, endorsed by 16 organizations from across Canada, to ensure stricter oversight of how EDC handles environmental, human rights and corruption risks.

“EDC must be governed by strong legislative controls,” says Karyn Keenan, director of Above Ground. “Otherwise the Canadian government, which is EDC’s sole shareholder, risks profiting from harmful and illegal business activity that may be carried out by EDC clients.”

Reforms recommended by Above Ground include prohibiting EDC from supporting firms involved in wrongdoing, subjecting it to judicial oversight and expanding the Auditor General’s mandate regarding EDC.

“Canada’s human rights obligations should be reflected in its laws,” says Alex Neve, secretary general of Amnesty International Canada. “In recent months the UN’s business and human rights working group and the Senate’s human rights committee have sent a clear message to the government that EDC’s operations must be in line with those obligations.”

Every ten years the government must review the Export Development Act and the mandate and activities of EDC, which issues over $100 billion in loans and other support to Canadian and foreign companies each year.

“Public dollars from EDC should be making our economy fairer and more equitable,” says Ian Thomson, policy specialist at Oxfam Canada. “Reforms are needed to make sure every EDC transaction supports the fair treatment and equal participation of women and men in the global economy.”

“This review will be the first to consider EDC’s social, environmental and human rights responsibilities,” says Ken Neumann, national director of the United Steelworkers. “For it to be a meaningful examination, parliamentarians will need to take a close look at EDC’s track record.”

Above Ground’s recommendations for reforms are endorsed by

Above Ground works to ensure that companies based in Canada or supported by the Canadian state respect human rights wherever they operate. It is a project of Tides Canada, a national charity dedicated to a healthy environment, social equity and economic prosperity.