OTTAWA – The Canadian Network on Corporate Accountability (CNCA) is greatly encouraged by the Minister of International Trade’s announcement today on the creation of a Canadian Ombudsperson for Responsible Enterprise. The human rights ombudsperson will investigate complaints concerning the overseas operations of Canadian companies and will issue public findings on allegations of harm. The office will make recommendations for redress; regarding corporate eligibility for government services; and with respect to policy and law reform.

“Over the years, cases of real concern have mounted, involving worrying allegations that Canadian mining and other companies have been responsible for serious human rights abuses in countries around the world,” said Alex Neve, Secretary General of Amnesty International Canada. “At long last there will be a body and process in place to hold Canadian companies accountable for human rights in their overseas operations.”

“Sexual violence against women – especially Indigenous women – has been associated with Canadian commercial projects overseas,” said Jean Symes of Inter Pares. “This government’s feminist foreign policy needs an ombudsperson who will address the violence that has happened in the past, and work to deter it in the future.”

“Our primary goal in working for the creation of this office has been to ensure access to remedy for the mining-affected people,” said Catherine Coumans of MiningWatch Canada. “In nearly 20 years we have seen the level of human rights abuses and mining-related conflict increase globally as companies push deeper into remote areas and onto the lands of Indigenous peoples.”

“The credibility of this new office depends on its power to access relevant information,” said Karyn Keenan, Director of Above Ground. “The ombudsperson office must be equipped with the tools needed to compel corporate disclosure.”

“Individuals and communities impacted by Canadian mining operations around the world are counting on this office to prevent and redress human rights abuse by Canadian companies,” said Reverend Jordan Cantwell, Moderator of The United Church of Canada.

“Canadians have been asking for the creation of an ombudsperson since 2006,” said Serge Langlois, Executive Director of Development and Peace-Caritas Canada. “Today’s announcement responds to a decade of actions by over 500,000 Canadians calling on the government to create an ombudsperson.”

“The CNCA wants to ensure that the new human rights ombudsperson has the powers and independence necessary to secure its credibility with all stakeholders, including the overseas communities impacted by Canadian companies,” said Emily Dywer of the CNCA.

An effective ombudsperson office will help position Canada as a global leader in business and human rights.

Above Ground is a member of the Canadian Network on Corporate Accountability (CNCA), which brings together 34 civil society organizations from across Canada and represents Canadians who are concerned about the environmental and human rights impact of our extractive industry overseas. The CNCA supports communities, workers, Indigenous peoples, and environmental and human rights defenders from around the world by advocating for policy and law reform to hold Canadian companies to account. 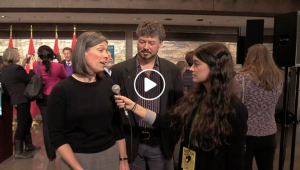 Watch interview with Karyn Keenan, director of Above Ground, and Jamie Kneen of MiningWatch Canada.