Protecting people and the environment. Promoting industry-leading environmental practices. Taking action on climate change. These are core principles that guide how Export Development Canada (EDC) operates, according to the agency’s website and annual reports.

And yet, year after year, the Crown corporation invests billions of dollars in sectors that cause significant environmental harm, such as mining and oil and gas.

The oil and gas sector received on average $13.8 billion in support from EDC every year from 2016 to 2018.1This calculation was made by Oil Change International from EDC’s reported sector totals, plus the $6.5 billion credit agreement provided by EDC under its “Canada Account” to finance the government’s purchase of the Trans Mountain pipeline. This latter figure was not included in EDC’s calculation of its sector total for 2018. This makes Canada the second-largest provider of public finance for fossil fuels in the G20, surpassed only by China. On a per capita basis, the level of support Canada provides for fossil fuels via its export bank is by far the highest of any G20 nation.2See the report Still Digging: G20 Governments Continue to Finance the Climate Crisis, page 14. The USD$10.6 billion figure given for Canada in this report is equal to CAD$13.8 billion.

Many other public financial institutions, including the World Bank and Ireland’s sovereign wealth fund, have pledged to end their support for fossil fuel production or fossil fuel companies due to the global climate threat posed by the relentless expansion of these industries. But while EDC has adopted some restrictions on support for coal, it hasn’t committed to even reducing its total level of support for fossil fuels, now or at any point in the future.3EDC has pledged that by 2023 it will reduce by 15% its financing support for six carbon-intensive industries in its portfolio, compared to a 2018 baseline. Since one of these sectors is upstream oil and gas, EDC could meet its target by reducing lending for fossil fuel exploration and drilling, but it could nonetheless increase other forms of support, such as insurance, for these activities. It could also increase its lending and insurance for other types of oil and gas development, such as new pipelines and refineries.

Global warming is already causing immense harm, with hundreds of thousands dying and hundreds of millions more being seriously harmed every year due to its impacts.

Canada is bound by the Paris Agreement to undertake “ambitious efforts” to achieve the deep cut in emissions needed to limit global warming to “well below” 2°C, and no more than 1.5°C.

Ever-growing oil and gas production is putting this goal increasingly out of reach. Research suggests that burning the oil and gas reserves in the world’s currently operating fields alone would warm the globe beyond the 1.5°C limit, and that the world must achieve net-zero emissions by mid-century. 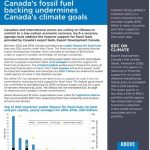 Download our backgrounder on EDC’s role in fuelling the climate crisis.

As we outline in this case study, a handful of major players in Alberta’s oil sands industry have benefitted from at least $7.28 billion and up to $16.13 billion in EDC loans since 2010. The province’s vast Athabasca oil sands deposits are one of the most GHG-intensive sources of crude in the world, with emissions during the extraction and processing phase about double the average value for North American oil fields examined in the Oil-Climate Index. The industry is set to expand significantly in coming years, driving up its emissions and compounding its other environmental impacts, from the degradation of large swathes of boreal forest to the accumulation of toxic tailings waste in massive artificial lakes.

The routine impacts of offshore exploration and drilling operations, which are carried out by EDC clients such as Murphy Oil and Schlumberger, can have severe consequences for marine life. Both firms are involved in “deep water” projects, in which spills and blowouts like the one that set off BP’s Deepwater Horizon disaster in 2010 are more likely both to occur and to cause long-lasting ecological harm. And as an ongoing, 16-year-long oil leak in the Gulf of Mexico shows, companies drilling at extreme depths may be incapable of halting a leak once it starts.

Parex, Canacol and Ecopetrol are just a few examples of EDC clients involved in oil and gas fracking, which is extremely water-intensive. At one field recently studied by U.S. scientists, gas fracking operations consumed over eight times more water per unit of energy produced than conventional drilling. Companies commonly dispose of the wastewater produced by pumping it back into the ground, which can contaminate surface and groundwater with dangerous substances. Wastewater reinjection and the fracking process can also induce earthquakes.

If EDC doesn’t rule out supporting these exceedingly high-risk forms of oil and gas extraction, where does it draw the line?

The answer isn’t clear, because the agency doesn’t publish any information about the companies and projects it declines to support. Aside from its coal-based exclusions, EDC doesn’t identify in its publicly disclosed policies any type of activity that it won’t in principle support due to environmental concerns.

The public is left with little means of understanding what sorts of impacts or degree of risk EDC deems to be acceptable, beyond looking at the list of companies it has financed.

The environmental reviews that EDC says it carries out on all potential financing deals are meant to consider not only the prospective client’s line of business but also its track record and environmental risk management capacity. Poor past performance, however, is not necessarily a barrier to receiving EDC support. According to the agency’s former head, EDC sometimes seek to influence a firm to improve its practices by “entering into a financial relationship” with the firm.

But too often, its clients’ performance ends up falling far short of the “industry-leading” practices the agency claims to promote.

Two companies in Colombia, for instance, have come under investigation by authorities following their engagement with EDC due to severe environmental harms linked to their operations. Ecopetrol has been fined and may face criminal charges following an oil spill from one of its wells in 2018, which was widely regarded as Colombia’s worst environmental disaster in decades. Authorities reportedly warned the company a year earlier of a spill risk at its wells. Empresas Públicas de Medellín, meanwhile, is being investigated for alleged environmental offences in its development of an enormous hydro dam that nearly collapsed in 2018, forcing the evacuation of 25,000 people.

EDC has in several cases approved additional support for an existing client even after the company was sanctioned by authorities or put on another investor’s blacklist due to environmental damage. For instance:

The Export Development Act places no meaningful environmental obligations or restrictions on EDC. It requires only that EDC weigh the environmental risks posed by major infrastructure projects — new mines or power plants, for instance — before financing or insuring them. It grants EDC discretion to support projects that are likely to have adverse effects, no matter how serious or certain the effects may be, as long as it considers the support “justified.”

The requirement only applies to loans or insurance provided specifically for such projects. This type of support accounts for just a tiny fraction of EDC’s business portfolio (about three percent). That means EDC is free to provide companies with other types of support, such as general corporate loans, without considering the environmental consequences of the business it’s facilitating.

Canada should make environmental due diligence a legal requirement for its export credit agency. We outline in detail how that could be done in our submission to the government for its review of the Export Development Act. With the reforms we recommend in place, EDC’s decisions — including about whether environmental risks posed by its clients’ business are “acceptable” — would be subject to meaningful transparency and accountability measures.

We identify legal reforms urgently needed to strengthen oversight of EDC in these two submissions to the Canadian government:

Furthermore, given the urgency of the climate crisis, the law should bar EDC from supporting fossil fuel companies. This would align the operations of Canada’s export credit agency with its international commitment to make financial flows consistent with a low-carbon economy.

Only once Parliament adopts such reforms can Canadians be confident that our export credit agency will take reasonable care to avoid bankrolling environmentally destructive activities.