In early 2019, as SNC-Lavalin awaited trial on corruption charges in relation to its Libyan operations, allegations that the firm earmarked federal government loans to pay bribes in other countries called into serious question the screening practices of Canada’s export credit agency.

Export Development Canada (EDC) asserts a commitment to “zero tolerance” for business obtained through bribery. Yet it routinely supports companies facing credible, widely reported allegations of corruption. We identify a number of these companies below.

These cases point to a glaring deficiency in Canadian law that grants EDC absolute discretion in how it manages corruption risk. Although the agency operates in sectors and countries with serious corruption problems, Canada has no legal provisions to ensure that EDC avoids supporting companies involved in bribery or to hold it to account when it fails to do so. Without such provisions, the government risks not only facilitating corruption, but also profiting from the proceeds. 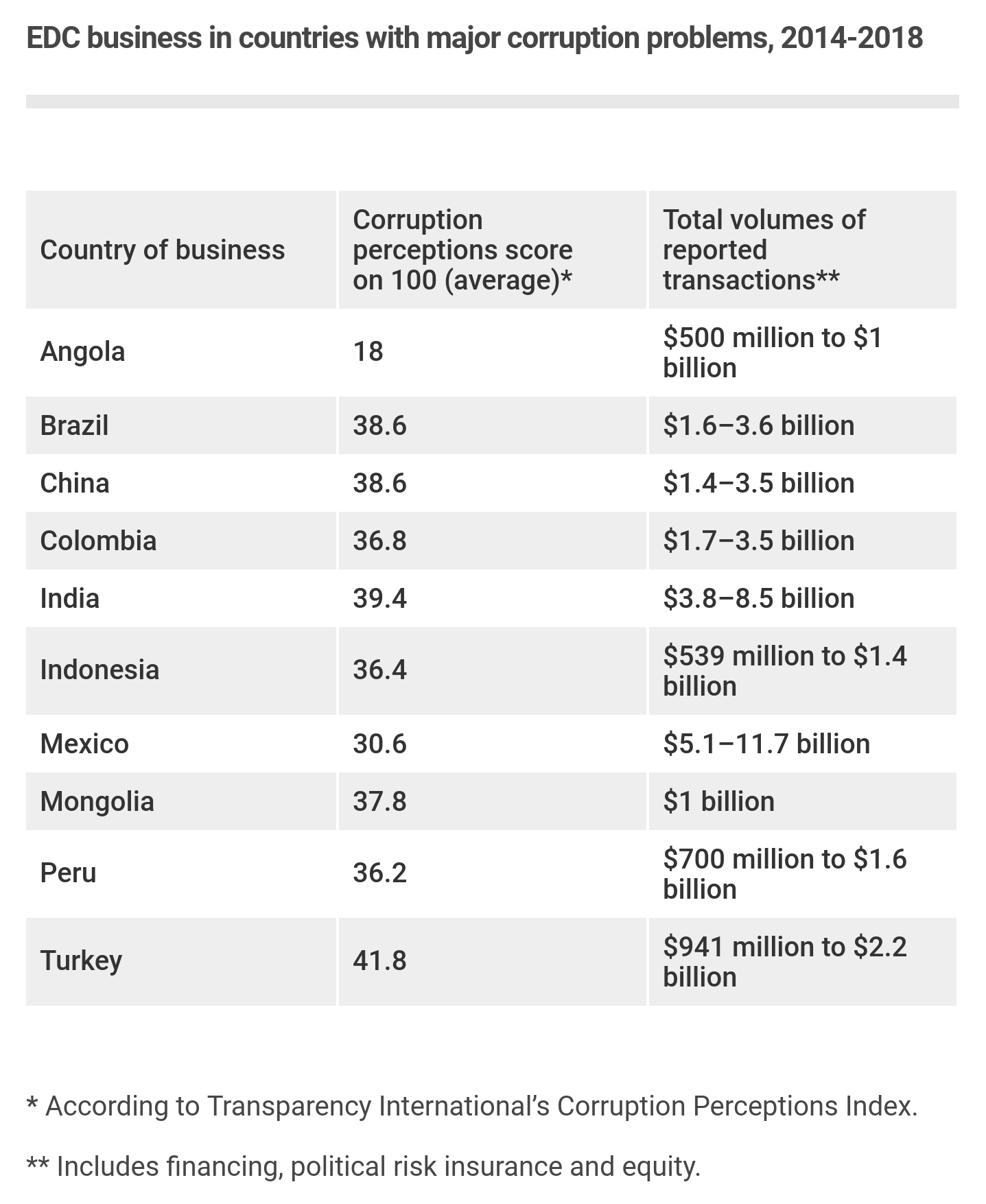 EDC’s anti-corruption policy is highly flexible, granting EDC staff broad discretion to make decisions on a case-by-case basis. The guidance EDC does provide falls far short of global best practice. For instance, the policy does not automatically disqualify companies charged with corruption or those blacklisted by the World Bank or other development banks. It states only that EDC will “[u]ndertake enhanced due diligence” before supporting such companies.

Only companies convicted of bribery are automatically denied support. Moreover, in the rare circumstance that this threshold is met, EDC sets no minimum term for debarment. The agency may resume support for a firm whenever it has, in EDC’s opinion, adopted “appropriate measures” to deter future abuses.

The policy focuses primarily on preventing EDC’s involvement in corrupt transactions, as opposed to its involvement with corrupt companies. It contains no clear commitment to avoid supporting a firm engaged in corruption outside of the specific business activity backed by EDC.

EDC doesn’t describe in detail its “enhanced due diligence” or the preventative measures it will require of companies convicted of corrupt practices. The agency is equally opaque regarding its anti-corruption screening, monitoring and sanctioning of specific clients. As a result, it’s only following media coverage questioning EDC’s support for high-profile clients charged with corruption that Canadians have learned of EDC’s response to these charges.

SNC-Lavalin has benefitted from up to $1.25 billion in financing from Export Development Canada since Canadian prosecutors charged the company in 2015 with bribery-related offences in Libya.1 SNC-Lavalin later reached a settlement agreement, in which the firm’s construction division pleaded guilty to fraud. One of its former executives was convicted of corruption-related offences and sentenced to 8 years in prison.

Before that, in 2013, SNC-Lavalin’s subsidiaries around the globe were banned from bidding on World Bank projects for 10 years due to a “conspiracy to pay bribes” to land contracts in Asia. The ban was the longest ever agreed to in a settlement with the World Bank.

The same year, a CBC and Globe and Mail investigation flagged suspicious payments made by SNC-Lavalin — similar to those that landed the company in trouble with the World Bank — in another eight countries across Africa and Asia.

An EDC spokesperson told The Globe and Mail in 2019 that the agency held off on providing new support to SNC-Lavalin for a few years following the World Bank debarment in 2013. By 2017, EDC resumed its support for the company, even as it awaited trial in what one former Crown prosecutor deemed “the most serious and important prosecution of corporate corruption in modern Canadian history.”

Bombardier and the Guptas

In 2014, EDC made a loan to a company owned by South Africa’s Gupta family for the purchase of a luxury Bombardier jet. The Guptas, who were subject at the time to high-profile corruption allegations tied to their close association with then-President Jacob Zuma, had been previously denied loans by other financial institutions.

EDC cancelled its loan to the Guptas in late 2017, citing a default on payments. Then in early 2018 police issued arrest warrants in relation to a corruption scandal for at least two members of the Gupta family, one of whom reportedly fled South Africa in the jet. While the charges were later dropped, the Guptas’ role in other suspicious business deals remains under investigation.

One of those deals is a lucrative locomotives contract awarded by Transnet, a state company reportedly controlled by Gupta allies, to four firms including Bombardier. Allegations emerged in March 2018 that Bombardier sold the Guptas the jet at a steep discount to gain favour in its bid for the deal. Bombardier’s share of the locomotives contract was also financed by EDC. Transnet’s new chairman wants Bombardier to return excessive payments he claims it received as part of the deal.

Bombardier also faces allegations of corruption in other jurisdictions, as outlined by a Globe and Mail investigation in late 2017, and its senior employees have been under criminal investigation in Sweden since at least 2016.

Since cancelling its loan to the Guptas in 2017, EDC has financed at least 15 new Bombardier deals.

Several other companies have received EDC support despite facing widely reported corruption allegations. They include:

EDC claims to “lead by example” on issues of business ethics and integrity. But its decisions to support companies blacklisted by other export credit agencies and development banks suggests that its tolerance for corruption risk is higher than that of its peers.

Other public agencies also show greater transparency than EDC in the application of their anti-corruption policies. The World Bank publicly announces its decisions to ban companies from bidding on contracts due to past misconduct. The public can access information about why firms have been debarred and for how long. At least five other development banks and many governments also publish lists of companies they’ve debarred. Similarly, Norway’s government pension fund publicly lists all firms it won’t invest in due to ethical concerns. EDC publishes no such list.

Under the Canadian government’s current policy, the repercussions of a bribery conviction in Canada on a company’s eligibility for government contracts are clear: it will be banned from bidding for 10 years. Whether a conviction would trigger EDC to cut off financial support, and for how long, is a far murkier question. In SNC-Lavalin’s case, a conviction might very well have had no effect on EDC’s decisions, since the agency already concluded in 2017 that the company had taken sufficient steps to “resolve issues of the past.”

We identify legal reforms urgently needed to strengthen oversight of EDC in this submission to the Canadian government:

For a more detailed analysis of reforms intended to improve EDC’s anti-corruption due diligence, see our April 2018 report:

As Parliament pursues its review of the Export Development Act, it must introduce amendments that will prevent EDC from supporting companies that engage in corrupt practices or are at high risk of doing so. Canadians expect all public institutions to operate at the highest standards of integrity. Strengthened legislative oversight of EDC will make a crucial contribution towards fulfilling that expectation.