Despite abuses at its Morro do Ouro mine, Kinross Gold is a frequent client of Canada's export bank
Photo © Justiça Global

On the outskirts of Paracatu, a small city in the eastern Brazilian state of Minas Gerais, lies the country’s largest gold mine, known by locals as Morro do Ouro. The mine, which began production in the 1980s, has undergone a dramatic expansion since 2006 under the ownership of Canadian company Kinross Gold.

In 2017 Above Ground and Justiça Global released a detailed report documenting how the expansion of the Morro do Ouro mine negatively impacted the lives, land and livelihood of local people.

“People will sell, people are forced to sell, but they’re unhappy. Everyone sells, but they’re upset. How can they stay? There’s no way.”

The report shows that Kinross’s project displaced the residents of traditional communities formed over a century ago by former African slaves. These communities have land rights under Brazilian law, and the process to formalize their collective title was well underway when Kinross announced its expansion plan and Export Development Canada (EDC) provided financing.

Despite sustained legal action by federal prosecutors seeking to block the project, state authorities gave Kinross the green light to use the communities’ land for its expanded operations, with no regard for their outstanding land claims or right to be consulted. The company meanwhile pursued deals with individual families to acquire the plots they occupied in exchange for payment. The people who our researchers spoke to said they entered into such agreements without legal advice, and felt they had no choice but to leave.2Kinross asserts that it acquired the land legally, through fair negotiations with each family, and that it maintains a “respectful and constructive relationship” with the affected communities. Kinross’s position on these and other issues raised above is outlined in this February 2018 response to our report.

The report also raises concern about environmental oversight of the mine, which is located within 500 metres of neighbourhoods where hundreds of families live, as well as safety measures to keep people from entering the mine site.

In 2016, four men were found dead in the mine’s waste effluent pipes, which they reportedly entered to extract remnants of gold left in the tailings. Another was found dead at a tailings dam in February 2017.

Nearby residents have long expressed concern about potential health risks posed by the high arsenic content of the ore processed at the mine. Kinross contends that scientific studies examining local arsenic exposure “clearly show that arsenic from our operations is not a public health concern.”

Read the full report published by Above Ground and Justiça Global in 2017: 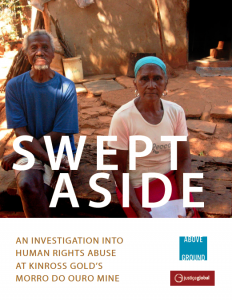 But in a 2019 report commissioned by Above Ground, leading hydrology and geophysics expert Steven H. Emerman reviewed the findings and found that the studies repeatedly invoked by Kinross to deny public health risks were seriously flawed. In one of the studies, researchers likely underestimated arsenic concentrations in water sampled from locations near the mine, but nonetheless found elevated levels in several locations.

Since Kinross acquired the Morro do Ouro mine, the Canadian state has provided the company with up to $1.2 billion in financing through EDC. Kinross received five EDC loans between 2012 and 2017, long after Brazilian prosecutors had called attention to the violation of communities’ rights during the expansion of the mine, and a federal agency had reported that the company’s actions resulted in the “elimination of an ethnic community.”

The harmful impacts of Kinross Gold’s mine have had no apparent impact on EDC’s willingness to support the company. EDC was certainly made aware of these impacts in 2017 with the publication of our report, which included testimony from locals that their grievances had not been resolved. In response, a senior EDC official declared that Kinross had taken “appropriate and responsible actions to address issues” at the mine, and that those actions were “consistent with international and industry best practices.”

A few months later, the agency issued Kinross another loan.