The Hidroituango dam is one of South America’s largest infrastructure projects, a colossus of engineering intended to furnish nearly a fifth of Colombia’s energy needs. But the project’s many failings have proven catastrophic. In 2018, the massive structure nearly collapsed, sparking a national emergency that forced the evacuation of tens of thousands of people. The company behind the project, Empresas Públicas de Medellín (EPM), is under criminal investigation for alleged corruption and environmental damage in its development of the dam.

Warnings of corruption and social and environmental harm have accompanied the venture from its earliest days.  Yet Canada’s export credit agency, which reports that it only supports “environmentally and socially responsible” business, helped make the project happen. In 2016, Export Development Canada (EDC) approved a $466-million loan to EPM, nearly half of which was used to finance Hidroituango, EPM’s flagship project.

“[W]hen one considers the environmental and sociocultural implications for communities in the municipalities where [Hidroituango] is located, its harmful impacts are disastrous.” [translated from Spanish]

Local communities have long opposed the dam, which has impacted tens of thousands of people who depend on Colombia’s second largest river, the Cauca, to earn their living.

In 2012, an award-winning book by anthropologist Jorge Eliécer David Higuita warned of the “imminent ethnocide” of the area’s indigenous Nutabes due to the dangers posed by the project.

By the next year, locals began to report forced evictions  — which would eventually displace hundreds of families — and lost livelihoods associated with the project. In the spring, hundreds of people from affected communities marched to Medellin, where for more than six months they occupied a sports centre to protest the project. 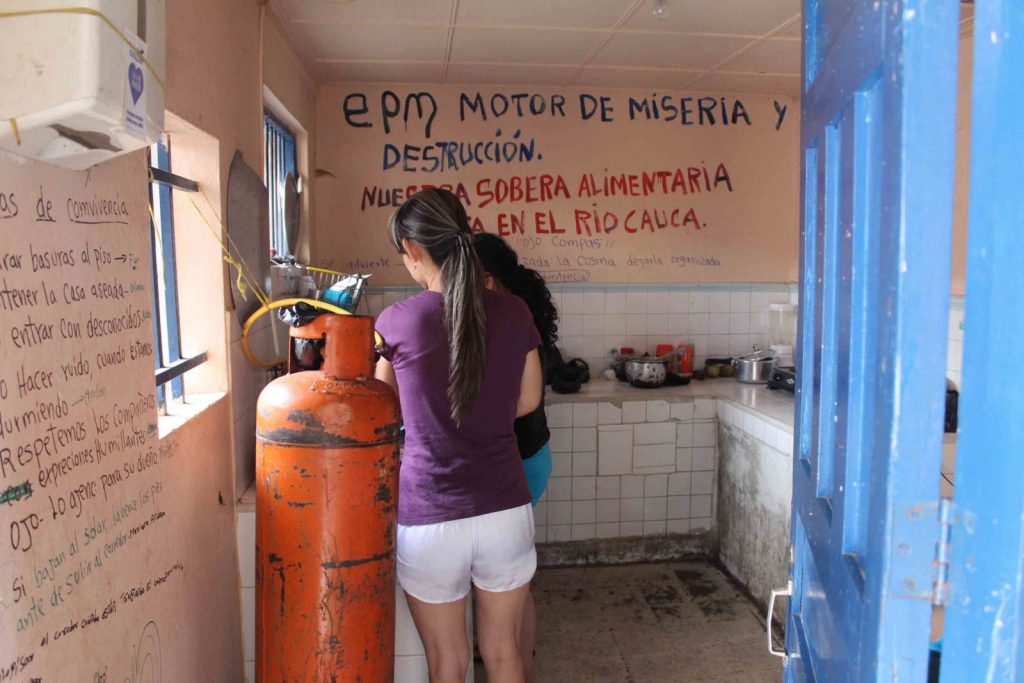 Local communities also warned that the project was exacerbating violence in the context of Colombia’s decades-long armed conflict. In 2013, Amnesty International warned that local residents who opposed the project were being labelled as guerrilla fighters and targeted by Colombian security forces. The Movimiento Ríos Vivos Antioquia coalition, which brings together civil society organizations critical of the dam, reported cases of torture by Colombian armed forces, mass detentions and surveillance. Two of its members were murdered that year. Swedish NGO Swedwatch confirmed a pattern of threats and abuse against local residents by the private and public security personnel contracted to guard the site.

All of this information was in the public domain well before EDC approved its loan to EPM in 2016.

2012: A bidding process mired in controversy

Widespread suspicions of corruption emerged from the very start of the project. In 2012, EPM awarded the contract to build the dam to the CCC Ituango consortium, led by Brazilian company Camargo Corrêa. Colombian media reported numerous complaints from competing firms and regional politicians who alleged that the tendering process was biased in CCC Ituango’s favour.

A number of companies chose not to participate in the competition because they believed it was rigged. They pointed to CCC Ituango’s unrealistically low bid, last-minute changes to the bidding criteria that disqualified many of its competitors, and a conflict of interest that became the subject of a national controversy. Anti-corruption group Virtual Transparency published a report in 2012 that called for the barring of CCC Ituango from the competition.

Shortly after winning the contract, Camargo Corrêa was identified as a key figure in Brazil’s Lava Jato corruption scandal, the largest bribery scandal in the country’s history. In 2015 three of the firm’s top executives were convicted of corruption and money laundering in Brazil, and the company confessed its role in the massive bid-rigging and bribery cartel.

The mayor of Medellin, the city that owns EPM, responded to these events in early 2017 by calling publicly for an investigation into EPM’s tendering process. The Colombian attorney general wasted little time getting started.

EPM faced significant delays in the project schedule as early as 2013. The company took steps to accelerate the works, launching a plan to add a third water diversion tunnel, despite warnings from the project’s technical advisory board against doing so for safety and environmental reasons. According to Colombia’s comptroller general, EPM’s approval of the tunnel’s construction in 2015 was illegal, as it occurred over a year before the company obtained the required licence from environmental authorities. The environmental licensing body has since levied over $5.5 million in fines for this and other violations.

In May 2018 the tunnel’s blockage and subsequent collapse would cause the Hidroituango dam to nearly burst, endangering tens of thousands of people. In the resulting floods, a village was razed and critical public infrastructure destroyed.

The high cost of unheeded warnings

Nearly three years after the dam’s near-collapse in 2018, the structural crisis has yet to be resolved, and authorities reportedly haven’t ruled out the possibility that the dam may still collapse. Thousands of people who were evacuated in 2018 waited more than a year before being allowed to return to their homes in July 2019, though they remain on alert due to the risk of further evacuations.

“The Cauca River has all but dried up and it’s widely believed that the resulting damage is irreparable.” [translated from Spanish]

“The Cauca River is dying on us at an astonishing pace (…). Experts found fish that were hunger-stricken due to lack of nutrients, which affects the population.” [translated from Spanish]

In February 2019, the structural crisis prompted EPM to close two floodgates, choking off 80 percent of the Cauca River’s flow and killing tens of thousands of fish. The result, according to the chief public prosecutor, was an “environmental emergency” that continues to place the basic subsistence and livelihoods of tens of thousands of people at risk.

Colombia’s attorney general has launched a criminal investigation into the environmental damage caused by the dam. In 2018, the country’s comptroller general issued a scathing report that found EPM had developed the dam in a “high-risk” area without requisite technical studies and plans. He states that the environmental licensing and construction processes for Hidroituango were riddled with irregularities, many of which, if proven by prosecutors, carry criminal sanctions. In December 2020 the comptroller general laid charges against 28 individuals and contractors for these decisions dating back to 2008. Among them are former heads of EPM, former directors and board members of Hidroituango, political leaders, and the major companies involved in the project.

In August 2019, the attorney general laid criminal charges against a former EPM executive for offences related to contracting. The charges relate to ongoing investigations into suspected payments made to public servants in the tendering process for the dam.

In October 2019, the Inter-American Development Bank announced a historic investigation into whether it violated its social and environmental due diligence policies by financing Hidroituango without adequately evaluating the project’s impacts.

The comptroller general estimates that the dam disaster has cost the public purse $1.5 billion.  He states that the social and environmental damages caused by the project are, by contrast, “incalculable.”

Community leaders who oppose the project, meanwhile, continue to face intimidation and violence. Two more were murdered in 2018.

In July 2019, in response to a Globe and Mail investigation, an EDC spokesperson was called on to account for the bank’s due diligence on its loan to EPM:

Shelley Maclean, a spokeswoman for the agency, told The Globe by e-mail that EPM was screened twice, once when the loan was made, and a year later when its terms were extended.

She says EDC “found the company to have adequate policies, procedures and programs in place at the corporate level related to the environment, anti-corruption, and human rights.” (…)

Ms. Maclean says the agency’s review process “did not identify allegations of irregularities prior to 2017.” Following the Lava Jato news, she says, EDC “engaged with EPM (…) We noted that EPM had launched an internal investigation and was co-operating with the authorities despite there not being a formal investigation [at the time]. The company also confirmed to us that the contract awarding for the Hidroituango project followed strict requirements for transparency and public oversight required under Colombian law.”

The agency’s president and CEO Mairead Lavery has since suggested its loan to EPM may have been a mistake, saying that it “tied EDC’s name to an environmental, economic and human catastrophe.”

“Without foreign money, Hidroituango would not have been possible. (…) The responsibility for our lives and protection therefore rests with its investors as well.” [translated from Spanish]

In November 2019, a prominent leader from a community affected by Hidroituango travelled to Canada and met with officials at Export Development Canada. Isabel Zuleta, a spokesperson for the coalition Movimiento Ríos Vivos, challenged the officials to explain what EDC is doing to address the harms caused and dangers still posed by the dam. They offered no answers to these questions, instead speaking in general terms about EDC’s efforts to “align” itself with the UN Guiding Principles on Business and Human Rights and to explore the concept of “leverage” in its relationships with companies. No acknowledgment was made of EDC’s responsibility to ensure that people harmed and endangered by Hidroituango receive remedy and protection.

EDC’s role in the Hidroituango disaster demonstrates the urgent need for Ottawa to impose rules on its export credit agency. Without mechanisms to hold this Crown corporation to account for its impacts on people and communities, strong risks remain that Canada will continue to bankroll projects as reckless and harmful as EPM’s dam.