Read and share our joint op-ed with Amnesty International 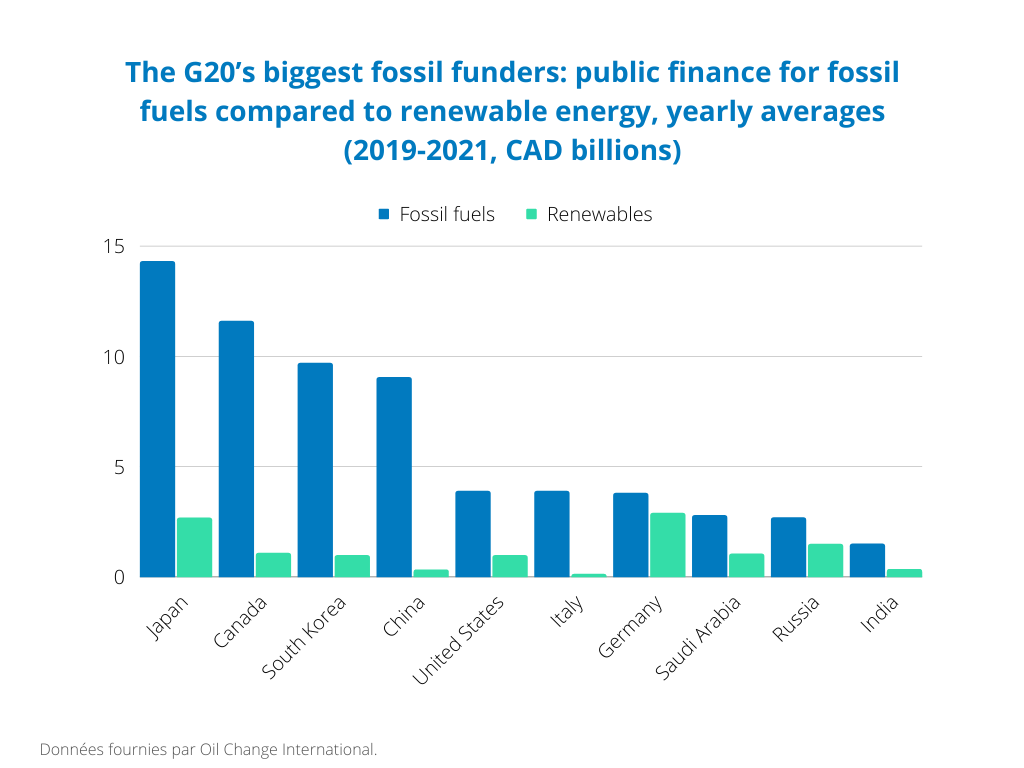 Between 2019 and 2021, Canada provided more public finance for fossil fuels than any other country in the G20 other than Japan. Nearly all of this financing was delivered through Export Development Canada (EDC), which provided on average $11.6 billion a year in support to Canadian and foreign oil and gas companies. This was nearly ten times greater than EDC’s support for renewable energy.

EDC has no plan to end its support for fossil fuels. As of September 2022, the agency’s annual support for the industry, including financing through the Canada Account, was on track to reach nearly $20 billion this year.1EDC’s support to the oil and gas sector totalled $5.9 billion for the first three quarters of 2022. If EDC’s support to the industry remains stable through the final quarter, the annual sum will equal approximately $7.4B. In addition to this, EDC provided financing through the Canada Account to support the Trans Mountain Expansion project: this includes a loan worth between $1.75 billion and $2 billion, as well as a loan guarantee worth between $9.75 billion and $10 billion.

Above Ground and over one hundred other civil society organizations have called on Ottawa to immediately end EDC’s support for fossil fuels, in Canada and abroad. This is necessary to avoid catastrophic warming of over 1.5°C, which experts say means immediately halting development of all new oil and gas fields, ramping down production, and leaving the vast majority of Canada’s oil sands reserves unexploited.

A small step in the right direction

At the UN climate change conference (COP26) in Glasgow last fall, Canada joined the United States, the United Kingdom and dozens of other countries in pledging to end a portion of this finance – certain types of support for the overseas fossil fuel development – by the end of 2022. Ottawa released the guidelines for implementing this commitment in December 2022. The government states that it will impact $2.5 billion in “current, existing business” from EDC that will not be renewed once the maturity dates are reached.

This represents only a fraction of EDC’s overall fossil finance, much of which flows to companies and projects in Canada. In recent years, this domestic support has included billions in loans to projects such as the Trans Mountain and Coastal GasLink pipelines, as well as to the country’s major oil sands players.

The federal government has also committed to phasing out domestic fossil finance, but has not committed to a deadline. The finance, natural resources and environment ministers have been tasked with developing the plan, with a phase-out date expected to be announced within months.

Now is the time for Canadians to speak up

This means ending public support for all oil and gas production and infrastructure, such as pipelines or refineries. And it means that there can be no loopholes for companies that use carbon capture, a technology that encourages increased oil production and emissions while prolonging our dependence on fossil fuels.